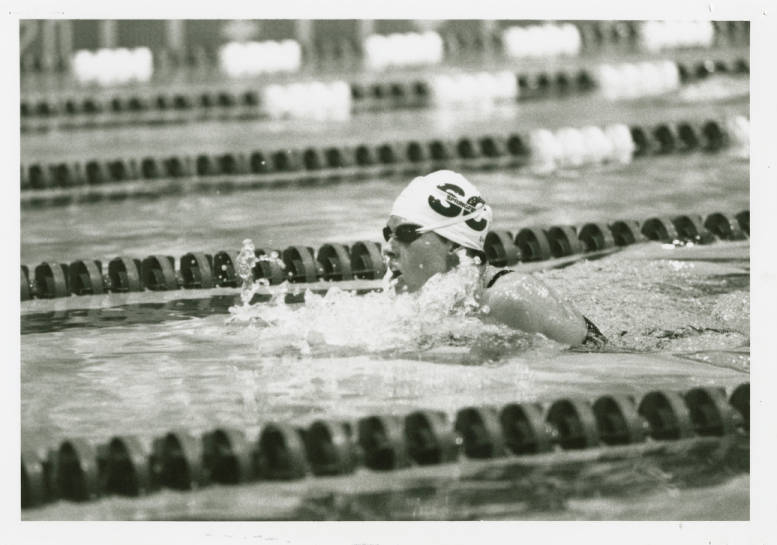 The Springfield College Swimming and Diving Team got its start in 1914, the first full year that the schools’ new Natatorium, McCurdy Natatorium, was in use. Professor George B. Affleck served as the first head coach of the men’s varsity team. Listed as swimmers on that team were Jack Rothacher and Erastus W. Pennock. Both men later became two of Springfield's most successful coaches, Rothacher in football (and swimming) and Pennock in wrestling. Affleck coached until 1925 with a three year break during World War I. The coaching responsibilities in 1920 were taken over by Herbert E. Brown, a senior at Springfield College that year.

In 1937 Charles “Red” Eaton Silvia took over the coaching duties. A Springfield College swimmer himself, he earned both his BS (1934) and MS (1940) at Springfield College. Silvia coached from 1937 through 1973; a career that included numerous collegiate championships and an amazing overall record of 189 wins to150 loses. He also coached more than two-hundred Springfield College athletes to All-American status, including William A. Yorzyk, an Olympic Gold Medalist in the 1956 200-meter dolphin-butterfly. At these Olympics, Silvia served as an Assistant Coach of the United States Olympic Swimming Team. He also coached Dr. Davis Hart to his record-breaking English Channel swim from England to France in 1972. Silvia has been honored as NCAA District I Coach of the Year (1970), was named to the Springfield College Athletic Hall of Fame (1973), served as the chairman of the board of the International Swimming Hall of Fame, wrote “Life Saving & Water Safety Today” - one of the first text books on life saving and water safety - and was named Springfield College’s Distinguished Professor of Humanics in 1976.

After Silvia retired, Charlie Smith, an assistant coach and student of Sylvia’s, took over the duties of men’s swimming and diving coach. Charlie coached the men’s team until 1989. Always advancing the sport internationally, Smith was instrumental in strengthening international relationships between the Springfield College and countries in Asia, including as serving as the director of the International Academy at Springfield College, later renamed to the International English Language Institute at the College, from 1986-1999.

After 1989 the men and women’s team were coached by the same coaches. In 1989 John Taffe, head swimming coach, came to Springfield College. He was followed by Peter Avdoulos, head diving coach, who came in 1991. They have led the swimming and diving teams to multiple NEWMAC Championships and have coached many All-Americans and National Diving Champions since their arrival. John Taffe was also the head coach of the Netherland-Antilles squad in the 2000 Olympics in Sydney, Australia and has coached two Olympic Swimmers, Roy Burch and Justin Zook (Roy Burch represented Bermuda in the pool while Zook competed in the Paralympics for the United States, taking gold in the 2012 London Paralympics). Peter Avdoulos is one of the top diving coaches in the nation. Avdoulos has been the NCAA Division III Women’s Diving Coach of the Year four times. He has been selected as the New England Diving Coach of the Year eight times since 1991, and was named both the NEWMAC Men’s and Women’s Diving Coach of the Year for the 2002-2003 season and the 2012 and 2013 campaigns.

The Springfield College Swimming and Diving teams have used two facilities on the Springfield College campus. These include McCurdy Natatorium and Linkletter Natatorium. McCurdy Natatorium was a part of Judd Gymnasia, the first building erected on the present campus. A gift of Standard Oil President Herbert Pratt, it was named after physical education department head, Dr. James Huff McCurdy. It was completed in April 1913 and closed on March 18, 1968, being replaced by Linkletter Natatorium. Since that time it has served as a dance studio, weight room, the college bookstore, and, finally, in the spring of 2011, as the Springfield College History Museum which also includes the YMCA Hall of Fame.

Linkletter Natatorium was dedicated on October 21, 1967. It was named after Art Linkletter, the famed entertainer best known for his TV series "House Party", because he believed so much in the project that he sold his house for $250,000 and donated the money to the project as well as conducted many fund raising activities, including “Work Week”, where students worked jobs such as trimming hedges or moving telephone poles for donations. The natatorium had a movable bulkhead that could shorten and lengthen the pool, making it was the longest indoor collegiate pool in the Eastern US at that time, two classrooms with underwater picture windows that allowed coaches and instructors to observe the swimmers, underwater speakers that allowed them to correct swimming technique as they were swimming and a closed circuit television system to further analyze swimming skills. The Art Linkletter Natatorium was incorporated into the new Wellness and Recreation Complex in 2008.

Materials in the Springfield College Swimming and Diving Team Records collection include newspaper clippings, magazine articles, news releases, statistics (individual games, individual players, cumulative for season, and all time), correspondence, memorandums, notes, flyers, history manuscripts, brochures, programs, schedules, rosters, slides, and photographic prints having to do with the men’s and women’s varsity swim and diving teams of Springfield College. These include materials from the start of the men’s program in 1914. The vast majority of materials are from the mid-sixties, with the start of the women’s program, running through the early 2000s.

There are many team rosters, programs, brochures, news articles and releases, meet records and statistics, and overall team records from both the men’s and women’s programs. Contained in these materials are also correspondence, news and statistical information concerning and from the various conference or collegiate organizations that the teams belonged to, including the NCAA, Athletic Association of Intercollegiate Women (AAIW), Eastern College Athletic Conference (ECAC), New England Women’s and Men’s Athletic Conference (NEWMAC), and New England Intercollegiate Swimming and Diving Association (NEISDA). Brochures and Programs also contain information from NEISA or NEISDA, AAIW and NCAA Swimming and Diving Championships. Most of these materials fall between the late 1960s through the early 1990s.

The photographic prints, slides, negatives, and contact sheets include team photos, individual swimmers and divers, and action shots (both staged and not-staged) taken from meets and practices from the 1914-1915 school year (the first year swimming was an official sport at Springfield College) through the modern era. Both the men and women’s teams are represented, with the bulk of the photos coming between the late 1960s through the early 2000s.