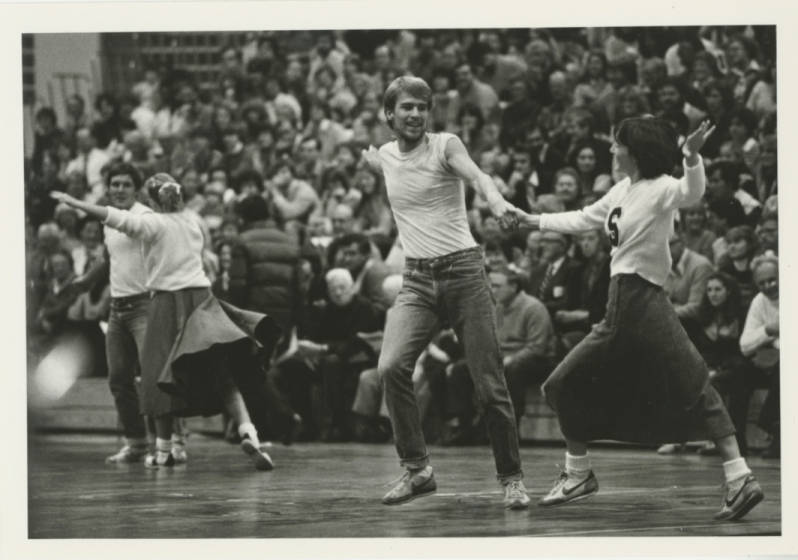 In the 1977-1978 handbook, the SC Exhibition Dancers is listed as a group that performs dance routines, such as the “twist, “Charleston”, and “hoe down”. Its primary function was to perform along with the SC Exhibition Gymnastics Team, though it appears from the records that they did perform and tour on their own. The highlight of the season was the annual Exhibition Homeshow. SC Dancers is listed as “a group, is an organization of male and female students from throughout the College community interested in performing, improving and perpetuating dance on Campus.” This basic definition and function appears to continue to this day.

Materials in this collection include newspaper clippings, programs, performance scripts (including note cards), correspondence, memorandums, flyers, programs, schedules, rosters from performances, photographic prints, slides, and films having to do with the SC Exhibition Dancers. Materials date from the early 1970s through 2000, with the bulk of the materials coming from the seventies. There are lists of dances performed, lists of dancers with dance assignments (mostly from the seventies), some correspondence that praises the performances, a set of directions for various dances used (including some that were taught at workshops by the director Lou Ampolo), and some handwritten scripts from shows that describes the dances that were performed. There are also programs from various shows (again, mostly from the seventies) including a performance at a MAHPER (the Massachusetts Association Health, Physical Education and Recreation) convention in 1977. There are also many photographs in the collection. Most are of performances, including a series of various dances from the mid-seventies, but there are also some photographs of Lou Ampolo and some group photographs of the dancers.