The earliest is a newspaper called Nobody's Business. It was published by the Student Association. Copies from October 1899 through November 1904. It is not known if this was the full extent of the publication, but it is all that is within the College Archives.

There are also some temporary papers. These include The Goat, an underground student newspaper put out in the 1968-1969 school year by the Ad Hoc Committee for Student Self-Determination, and the Freshman Newspapers that talk about happenings within the Freshman class, including sports, dances, meetings, camp, and classes.

Generally, "The Springfield Student" includes information about student organizations, athletics, alumni, and events. It also occasionally includes student poetry and fiction, as well as the conclusions of student-designed research. As the publication evolved, "The Springfield Student" began including editorials on world events and popular culture, as well as letters to the editor. Originally, the "Springfield Student" was published monthly from October through June, and its formatting resembled a magazine. In October 1913, the cover illustration simplified the title, the date, and the capital letter "S," but the content and structure remained unchanged. On September 27, 1916, "The Springfield Student" was reformatted to resemble a newspaper: the pages decreased from around thirty to just four, it no longer included a cover, and it became a weekly publication. In the inaugural weekly issue, the editors explained the motivation behind the change: "To sustain the intimate and helpful relations that our Alumni and College should stress, we feel that a weekly news publication is the best possible medium. [...] It is the purpose of the Staff to cover all College and Student Association activities in a very live way, reporting athletic contests, in brief, snappy articles, and giving members of the Alumni Associations space for contributions and newsy items." During October 1917, in acknowledgment of the limited resources and significantly smaller student body caused by the United States' involvement in World War I, "The Springfield Student" ceased its weekly publication and instead published a few pages each month in the "The Association Seminar." Two years later, in October 1919, "The Springfield Student" resumed weekly publication. In this first issue, the editors wrote that they wanted to re-establish the newspaper "as the mouthpiece or spokesman of the student body." 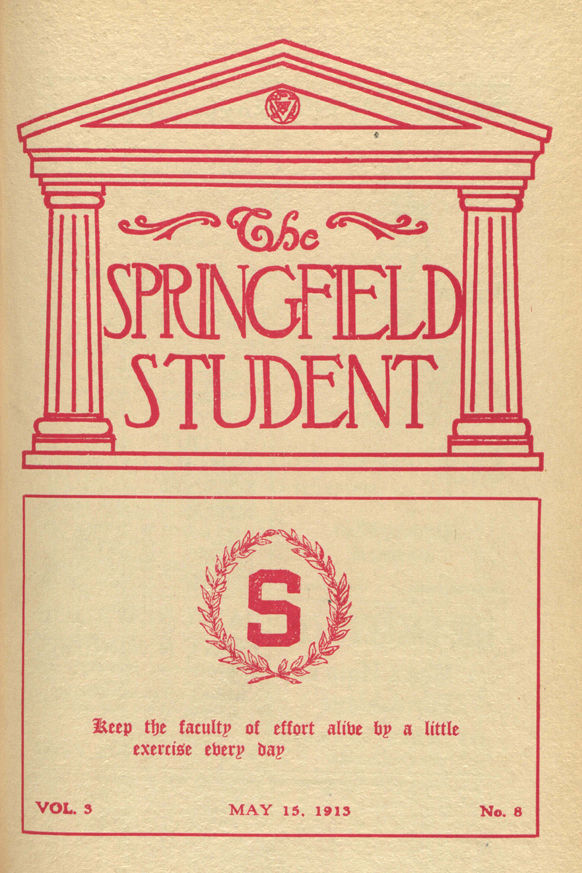