The Watchman as Lens for American Culture

There were interdenominational religious journals that attempted to move beyond theological and political schisms and promoted “Christian unity,” including the first Young Men’s Christian Association journal, the Quarterly Reporter of Y.M.C.A’s in North America, which began in Buffalo in 1856 and changed in 1859 to the monthly Young Men’s Christian Journal.

After the Civil War, the call for “Christian unity” was a lively topic among all religious publications, and the number of interdenominational journals increased. The YMCA, which had grown after the War, issued periodicals in several cities. Of these, the most important title was The Watchman (1876-1932), published out of Chicago. The Watchman (1876-1889) continued as the Young Men’s Era (1890-1898), and the Association Men (1899-1933) documents the growth of the YMCA in America. Springfield College has a full run or these YMCA periodicals, primary sources that touch upon nearly all subjects from the period after the Civil War until the Great Depression / World War II. 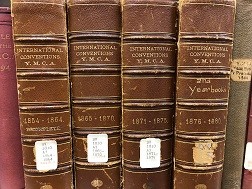