With its long and storied history, Springfield College has undergone many changes during its lifetime. One thing that has remained the same since our conception in 1885 is our mission of educating students in spirit, mind, and body for leadership in service to others. We incorporate this into everything we do, from academics to athletics.

In 1889 faculty member Luther H. Gulick, pioneer in physical education and recreation in the United States, created the inverted equilateral triangle logo to represent spirit, mind, and body. The School adopted the triangle as its emblem in December 1891. As the basis for the YMCA's official symbol, the triangle became one of the most recognized corporate logos around the world. Gulick explained What the Triangle Means in 1894. The College seal was registered as a trademark with the United States Patent Office in 1968. 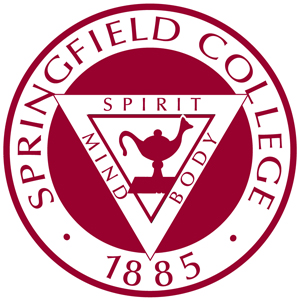 In 2015, Springfield College developed its first logo, which proudly displays the Gulick triangle, representing the balance of spirit, mind, and body. The seal remains a sacred symbol at Springfield College and is used for presidential communications and official College business, including on our diplomas.