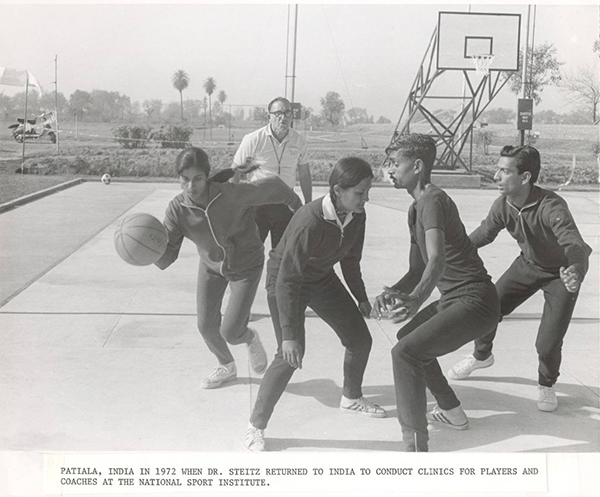 Edward S. Steitz was born on November 7th, 1920. After arriving at Springfield College in 1948, he was appointed as the head varsity basketball coach at Springfield College in 1956. His teams never had a losing season, and he ended with a 185-86 record. He served on the NCAA Men’s Basketball Rules Committee from 1967 through his death in 1990. He can be credited for creating the three-point shot, among many other rules. For this work and his passion for the game, Steitz was inducted into the Naismith Memorial Basketball Hall of Fame in 1983. Consisting of news articles, speeches, manuscripts, correspondence, and photographs, the materials in the collection reflect the influence he had on Basketball. This includes biographical information, materials on his nomination and induction into the Basketball Hall of Fame, many articles on his basketball rules work, including his three-point rules changes in 1986, some writings and speeches, and photographs of Steitz throughout his life, including images from the 1965 Springfield College basketball team World Tour.