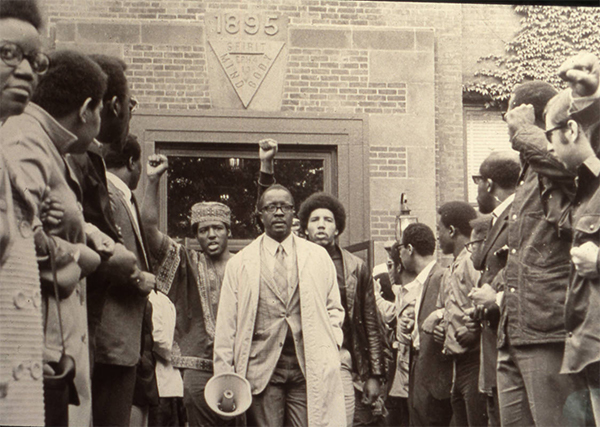 This collection contains materials that document events pertaining to the civil rights protests on the Springfield College campus in the late 1960s and early 1970s, as well as around the nation at that time. The Springfield College student body was shaken up in May 1969 after black students took over the Administration building in response to a denial of demands made of the school administration for more black power. Another group of students took over Massasoit Hall, a coed dormitory building, on March 10, 1970 and forced the students who lived there out, as a protest of the college administrators’ refusal to accept a new list of terms for additional services for the black Springfield College student body. The students that participated in this takeover were arrested and charged with civil contempt, with 47 of the 49 students charged serving jail time. The majority of the material in the collection is comprised of letters and documents sent between the black students group, then-president Wilbert Locklin, and the administrative staff of the school. These documents contain the lists of demands created by the black students’ group, and the return letters from Locklin stating his reluctance to accept them. Along with these documents are newspaper clippings detailing not only the events that transpired on the Springfield campus, but on other campuses across the nation that experienced civil rights protests by their students. The collection also contains several periodicals and magazines whose topics range from college protests to Bobby Seale and Malcolm X. These periodicals and magazines contain an insight into the culture of rebellion prevalent at the time. Along with the collections of clippings and correspondence are personal writings from both students and faculty expressing their opinions on the events that occurred at the time.