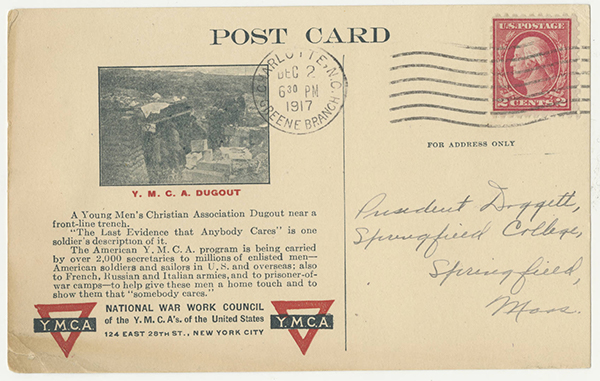 The College’s ties with the YMCA resulted in many alumni, students, and faculty going overseas to work as YMCA camp secretaries. Like many colleges and universities across the country, Springfield established their own SATC unit on campus and built a barracks for them in 1918. The United States entered World War One on April 6, 1917, and in response, Springfield College offered war work courses for YMCA secretaries. The training of war work secretaries and physical education directors made important contributions to the college's war effort. The YMCA provided canteen services at the US government's invitation and raised more than 150 million dollars (equivalent to 2.7 billion dollars in 2014) to comply with the request. This kind of work was not new to the YMCA, which provided similar services during the Spanish American War.

During World War Two, the college housed multiple branches of the military. The soldiers billeted on campus, including those in the 323rd college training detachment, the Navy at their contractual Convalescence hospital, Quartermaster Corps, and a military police unit.